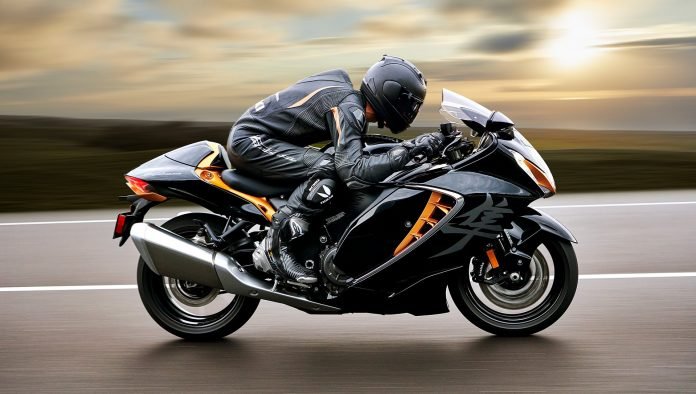 The 2022 Suzuki Hayabusa 3 has been worked on tirelessly by Suzuki’s engineers and has many new optimisations and improvements. It’s been thirteen years since the Hayabusa 2 was released, and so many riders were excited to see this new iteration. Although the Suzuki Hayabusa 3 has a lower peak output, it has far greater low-mid range performance, which is where most people will be spending a majority of their time anyway. The newest Hayabusa model uses the latest technological innovations to provide greater control and comfort and is touted as the “Ultimate Sports Bike”. Here at MotoReview, we’ve decided to put that name to the test and see just how well this bike stacks up against its predecessor and other similar bike models. Check out our review for the 2022 Suzuki Hayabusa 3.

+ Expansive range of electronics assist riders of all skill levels

+ Ergonomic improvements over the previous generation

− Extremely expensive with not enough innovations to justify the price

− Some people may think the design is unattractive

The new Hayabusa utilizes the latest iteration of “Suzuki’s Intelligent Ride System” (S.I.R.S). This is a collection of electronic systems which aim to optimize performance for on-the-fly adjustments, increasing control and predictability. One of these systems is the Suzuki Drive Mode Selector Alpha (SDMS-α). This allows the rider to select several modes to match confidence and experience levels. For instance, these settings can optimize the riding experience to better suit certain road and weather conditions. Using these different modes, you can safely get more confident and skilled at riding. Pictured below is the SDMS-α factory presets modes.

There are many more features in S.I.R.S. These have all been listed in our previous article, where all of the systems have been explained in detail.

These systems combined allow riders of almost any experience level to get on the bike. This easily allowed me to set the bike up to fit my skill level. They are incredibly responsive and non-intrusive, with many innovative quality-of-life features. For instance, on one occasion, I braked hard when cornering at 60 km/h, and it activated the emergency lights. I even found a way to adjust the maximum lean angle, where I set it to 45 degrees, which gave adequate room for the footpegs when cornering. When a motorcycle brings features like these to the table, it gets hard to go without them.

Compared to the previous generation, the Hayabusa 3 has more reliable and beefy transmission input shaft bearings. This is going to make a big difference for people that tune their engines up. The cylinder blocks have also received an overhaul, being less susceptible to cracking. Additionally, Suzuki has added an up and down quick-shifter with two modes, one normal, while the other is a much more smooth and leisurely shift. Although being an experienced rider, I’m not able to consistently change gears as smoothly as this system allows. It makes long-distance riding far more comfortable. However, it’s much slower than changing gears manually.

Suzuki has set several design goals for the new engine, although there has been one change that, on initial inspection, may dissuade some people from buying the bike. The peak power and torque output are lower than the previous generation, but this has been compensated for with a vastly optimised low and mid-range performance. The Suzuki Hayabusa 3 reaches 187bhp at 9500rpm and 150Nm at 7000rpm. Comparatively, Gen 2 reaches 195bhp at 9700rpm and 153Nm at 7200rpm. Both bikes do reach the same top speed, however. Below is a graph outlining this change and comparing it to previous generations.

Engine durability has been greatly increased due to several factors. The oil passageways have been revised and can now feed the crank with 54% more oil. Furthermore, the pistons and rods are stronger but weigh 116g less, and there have been changes to transmission bearing spec. Engine assembly specs have also been revised.

Cam timing has been altered to reduce valve overlap. Valve overlap is when the inlet and exhaust valves are open simultaneously. This gives the bike less peak power but makes running the Suzuki Hayabusa 3 much more environmentally friendly. A wider period of valve overlap shifts more gas through your engine, especially at higher revs. However, when this happens, fresh fuel coming into the chamber can leave directly through the exhaust, generating more emissions. Most importantly, the engine still feels incredibly responsive and fast. Below is a cam profile comparison graph.

The Suzuki Hayabusa 3 retains the twin-spar aluminium frame and swingarm from the previous generation. Extruded aluminium sections mix a degree of flexibility and strength, reinforcing the overall structure. This also helps achieve an optimal balance for the motorcycle, ensuring balance performs well even at 299km/h. This feature is commonly found on Supercar frames. There is a total of 700g of weight reduction thanks to the subframe, which incorporates straighter pipe sections.

To improve comfort and reduce rider fatigue, the handlebars have been placed 12mm closer to the rider. This was most noticeable on longer trips. Dead arms felt like a thing of the past. As a byproduct, handling greatly increases as you get more feedback from the front tyre’s contact patch. Your posture is also better supported with this change, allowing you to brake with more stability and possess a higher range of movement when cornering.

Both front and rear suspension are updated with an optimisation that minimises oversteering at low speeds, which equates to a stable and consistent feeling ride at all speeds. The front suspension is updated from the previous generation, using KYB inverted forks with 43mm OD diamond-like coating (DLC). The internal structure has been optimised to better absorb the road surface, with better grip and more stability. The internals of the rear KYB shock absorber has been optimised for comfort and straight-line stability.

With an analogue speedometer and tachometer and a brand new digital TFT LCD panel in between, the dashboard is laid out cleanly, with a luxury design. This dashboard design is similar to previous Hayabusa generations, however, a handful of changes make a big difference in readability during day and night. The speedometer and tachometer now feature bigger and bolder numbering, plus raised scale markings with an LED light around the perimeter.

Gold highlighting helped me read both the fuel and coolant temperature gauges quickly and accurately. SDMS and Active Data display screens on the TFT LCD panel also utilise gold highlights. This all results in a very clean and unique looking instrument panel, quick to read, with all the details you need and want.

The display automatically adjusts its brightness to an appropriate level using a sensor, but I manually adjusted it so it is bright at all times.

Bridgestone Battlax Hypersport S22 tyres have been selected as original equipment for the Suzuki Hayabusa 3. These tyres have been engineered for enhanced wet/dry grip and handling, featuring an optimized belt construction and a new compound. Combined, these features result in a lighter and more stable ride, which complement and highlight the performance of the Suzuki Hayabusa.

Featured on the Suzuki Hayabusa 3 are optimised Brembo Stylema front brake callipers. These have been designed to be lighter, more compact and methodically sculpted to increase cooling efficiency. This is complemented by the increase in diameter of the front discs, going from 310mm to 320mm. A new hole pattern has been utilised to make all of this work. Ultimately, this leads to a total of 10% temperature reduction in the brake fluid. Thanks to this reduction, vapour lock is prevented. This is where the formation of vapour makes the lever spongy, which negatively affects braking efficiency.

Also featured is the Motion Track Brake System, which is essentially cornering ABS. It combines data about the vehicle posture from the IMU with front and rear wheel speed sensor data to activate ABS when cornering. This means that the bike will less likely lose traction or be pushed upright. It will, however, better maintain its radius and lean angle, which supports tracing your intended line through a corner. Additionally, braking is further enhanced by using a Combined Braking System, which powers both front and rear brakes when operating the front brake lever.

Most importantly, however, is that these front brake callipers feel extraordinarily smooth and powerful. They also assist the new seven-spoke wheels in giving you more of a feel for what the contacts patches are doing. I even managed to do a hard trail-brake without feeling like I was putting myself at risk thanks to the cornering ABS.

The headlights are stacked vertically and contain large, bold styling, as is tradition with the Hayabusa models. The new generation brings a tighter and more angular look, neatly occupying the space between the Suzuki Ram Air Direct (SRAM) intake ducts. It blends seamlessly with the narrowed lines of the windscreen’s lower edge. Parts located inside the housing are coated in black paint to make the assembly of the bike stick out less. Either side of the air intakes is new position lights with indicators, forming a single, clean vertical line that neatly flows along the cowling. There are no longer any protrusions in these positions, unlike the previous generation.

The Japanese Kanji logo has been updated to look more sharp and stylised, leaning toward the bike’s front to emphasise speed. Smaller logos add highlights over the projector high beam headlight, on the black shroud, and the front of the single-seat cowl and logo on the TFT display startup.

The Peregrine Falcon’s neck feathers inspire the V-shaped accents located below the fuel tank, on the footpegs and in front of the air intakes. Hayabusa means Peregrine Falcon in Japanese, which is the fastest animal on the planet. It’s always interesting to see the namesake influencing the bike design, as it amounts to something that looks truly unique. I must admit, though, I’m not the biggest fan of the Hayabusa look in general. It looks a bit too elongated and out there to me. However, I am sure that many other people will appreciate this motorcycle’s unique and exotic design.

This is a costly bike. It is considerably more expensive at $27,690 ride away than the previous generation at release, which would put people off if they see that alongside the reduced peak output. As discussed previously, the peak output reduction doesn’t mean it is a slower bike.

Regardless of how many features and innovations have been added to the Hayabusa 3, it does feel like that bike is slightly behind its time. It doesn’t make nearly as much of an impact as the original Hayabusa, but it does retain its feeling very well. It feels like a cleaner, more refined and optimised version of the previous generation, with a couple of extra technologies that keep the design up-to-date. The Suzuki Hayabusa 3 is still an absolute powerhouse, with a unique look that will definitely turn heads.