Home Racing Valentino Rossi Explains Why He Hasn’t Retired Yet 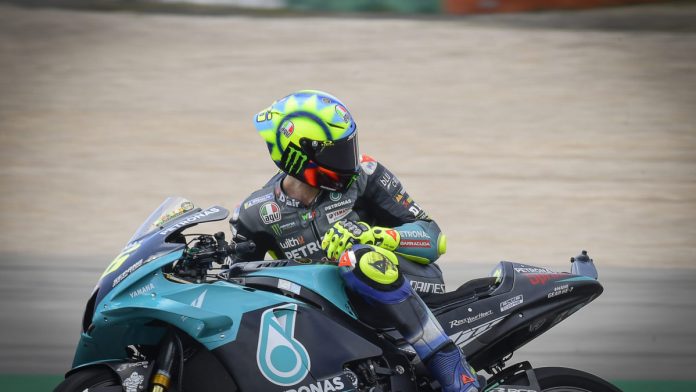 It has been a total of four years since Valentino Rossi’s last MotoGP win with him also sitting in 19th place in the current championship with Petronas Yamaha SRT. Before working with Petronas, Rossi was in his second eight-year stint with the Factory Yamaha team. Although he is still contracted to Yamaha, this is only for the 2021 season. A renewal offer will be dependant on the rider’s performance. In a statement, Valentino Rossi has explained why he hasn’t retired yet. He explains that he will make a proper decision during the summer break. Further elaborating, he also mentions that being in the top five riders would convince him to participate again in 2022.

It seems, however, that he is struggling to perform to the expectations that he has set out. Fabio Quartararo currently heads the standings with victories in the previous two races. Maverick Viñales, the Monster Energy Yamaha entry, is in third place in the championship after winning the season-opener. Franco Morbidelli, Rossi’s team-mate, is in 11th place.

Rossi understands that time is taking its toll, but that does not stop him from putting in every last ounce of effort to see if he can achieve his goals.

“My reasoning is straightforward, and for me, it’s strange that some people don’t understand it. Maybe my way of thinking is different,” Rosi told La Gazzetta Dello Sport.

“I like the way I feel, the sensation, the adrenaline that makes me win. Go onto the podium, or just have a good race. I’m fine for a few days. I like that feeling there.

“I know very well that in the end, time will have won, unfortunately that’s the case for everyone.

“But, I try with all my force to make it as difficult as possible.

“This is the only reason why I still race.”

Unfortunately, Rossi has only been in the top three on three occasions in the past 43 races. He doesn’t mind going out on a high note. He still wants to try his hardest to achieve positive results.

“What you lose by stopping doing what you like is more than what you gain by quitting when you are at the peak of your career.” declared Rossi.

“And anyway, you never know if it’s really over. In 2013, when I returned to Yamaha, for everyone, I was already finished.

“Instead, if they hadn’t stolen the world championship from me in 2015, I would have won another one. It would have been the 10th one, and it would have extended my winning sporting life by even six years.

“But I believe in it and I still want to try.”

When referring to the “stolen World Championship”, Rossi speaks of the controversy between himself, Jorge Lorenzo and Marc Marquez. This escalated when he kicked Marc Marquez off the #93 Honda at Malaysia. If Rossi were successful in that season, it would have been his eighth MotoGP/500cc title and his 10th World Championship in total.

“There, I threw away a world championship title that I could have a win, and it would have been 10 anyway. Even after the theft in 2015,” he observed.

Related links (Valentino Rossi Explains Why He Hasn’t Retired Yet):