Home Racing Marc Marquez Will Make His Return At Portimao 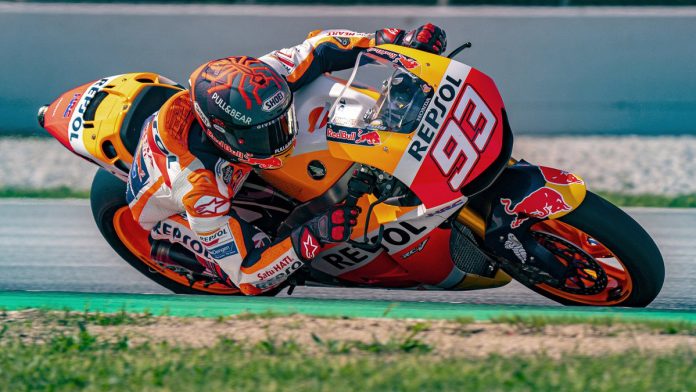 According to a statement released by Honda last weekend, Marc Marquez will make his MotoGP return this weekend at Portimao on April 16-18 for the third round of the season. The following is the statement Honda released in regards to Marquez’s return.

“In the review carried out on Marc Marquez by the Hospital Ruber Internacional medical team, four months after surgery, led by Doctors Samuel Antuña and Ignacio Roger de Oña, and made up of Doctors De Miguel, Ibarzabal and García Villanueva, for an infected pseudoarthrosis of the right humerus, a very satisfactory clinical condition was found, with evident progress in the bone consolidation process. In the current situation, Marquez can return to competition, assuming the reasonable risk implicit in his sporting activity.”

Ever since last July at Jerez, Marc Marquez has been out of action due to a broken right arm. A week after the injury, he attempted to return to Andalucian GP. Unfortunately, he exasperated his condition, which ultimately led to him needing more time to heal. Since then, he has undergone three operations in December. On this occasion, he had bone grafted from his hip onto his humerus.

Unfortunately, Marquez could not recover sufficiently in time for the start of the 2021 campaign. He was unable to participate in pre-season testing and the first two rounds of the season in Qatar. Test rider for Honda, Stefan Bradl, replaced Marquez for these events, achieving 11th place in the first of the two Doha races.

Unfortunately, Marquez’s recovery was delayed again due to an infection brought on by the second surgery. This continued to affect him for weeks after his comeback attempt at Jerez. He has not tested a MotoGP bike since his injury. However, he has since ridden the Honda RC213V-S test bike at Algarve and Barcelona to prepare for his MotoGP return.

Marquez has a new teammate this year, former KTM rider Pol Espargaro. This comes after Alex Marquez’s move to the LCR satellite team alongside Takaaki Nakagami.

“I’M VERY HAPPY!,” Marquez Tweeted. “Yesterday I visited the doctors and they gave me the green light to return to competition. They have been 9 difficult months, with moments of uncertainties and ups and downs, and now, I will be able to enjoy my passion again!

“See you next week in Portimao!!”

Honda has had a difficult season so far, standing fifth after the opening two rounds. Espargaro finished in eighth place and thirteen in the first two races, which added to the points earned by Bradl. Neither LCR rider has opened their points accounts thus far.

Related links (Marc Marquez Will Make His Return At Portimao):