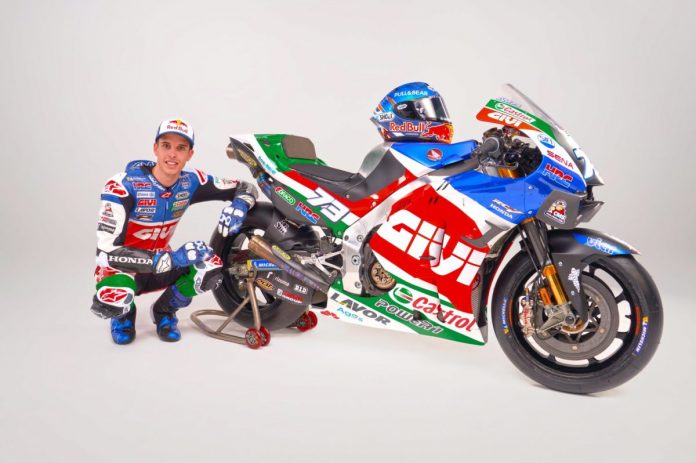 ealed Alex Marquez’s Honda livery, which he will use to compete in this year’s upcoming MotoGP championship.

As decided before the first race of 2020, Marquez will be on Honda’s satellite team, a switch from the factory team for his rookie season. Regardless of the switch, he will continue the receive the latest parts from Honda. Alex Marquez’s new RC213V will be featuring backing from Castrol and Givi.

Alex achieved He is the only Honda rider that has finished on the podium in 2020.

In his latest tweet, Alex expressed his excitement about his new colours.

Alex spoke of the key areas in which he must improve.

“We calculated in some places I was losing four seconds in the first lap, seven seconds in the first three laps. This is impossible to recover in the race. So qualifying is something I need to improve. I need to understand better the tyres. I come from many years on Dunlop in Moto2 and Michelin Is a different thing. When they are new you need to be aggressive but at the same time smooth.”

has a long history with Dunlop tyres in Moto2, and Michelin tyres feel and perform quite differently. While these tyres are new, he mentions that you have to be aggressive with them, while still riding smoothly. He has set a goal to always attend pre-season and to make time attacks in order to benchmark himself to ensure his progress and mastery with this new setup. In order to assist in achieving these goals, he will be working with LCR crew chief Christophe Bourguignon, who helped Cal achieve three MotoGP race wins.