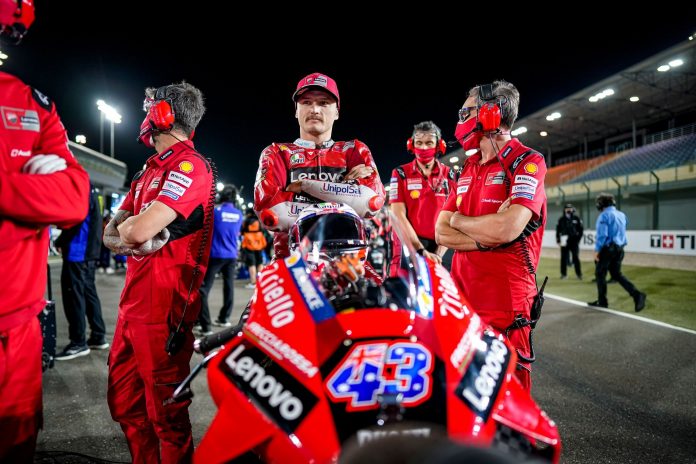 Ducati Lenovo Team rider Jack Miller’s surgery has been a success. During the closing laps at the Grand Prix of Doha, where he finished ninth, he began to suffer from a painful arm pump on his right-hand side. Before this, he was riding in the top five but was bumping into Joan Mir, who has accused Miller of intentionally colliding with him. Understandably, after this event, Jack Miller was unable to ride to his full potential and opted to undergo surgery on his arm.

Ducati confirmed that Jack Miller’s surgery took place in Barcelona at the Dexeus University Hospital on Tuesday the 6th of April. Dr Xavier Mir and his team carried out the surgery to remedy the issue. Miller must remain in the hospital for 24 hours after the operation and begin rehabilitation before the third MotoGP round next weekend at Algarve International Circuit in Portugal.

Miller reflects on the operation, pleased with the results despite the occurrence hindering his ability to ride.

“It was a short operation, and it went very well,” said Miller.

He optimistically anticipates the rehabilitation process. Despite the limited time frame before the next event, he approaches the situation with a calm mind.

“I can’t wait to start the rehabilitation. There are still ten days left before the next Grand Prix at Portimão.

“If my recovery proceeds normally, I’ll be able to be back on track in Portugal, even if not completely at my 100 percent fitness.”

Expressing gratitude, Miller thanks the medical team for their time and efforts.

“I want to thank Dr Mir and all his team at the Dexeus Hospital for their availability and all the care they have given me.”