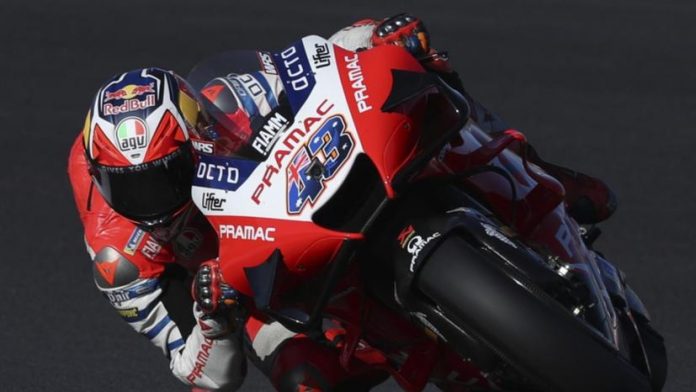 Jack Miller has admitted he was at fault for the Portimao Crash. He was in sixth place when his Ducati dropped in between Turns 2 and 3, on the sixth lap around the Algarve International Circuit. Jack ran wide and gave up his position to Aleix Espargaro at Turn 1 on the previous lap, where he admits he was at fault for the crash.

Jack Miller expresses remorse for the events, but he believes he will come back from it with great confidence, and this won’t deter him.

“Definitely, this is not the way we had hoped to end the weekend,”

“I felt strong today, and after a good start, I knew I had to start pushing.

“Unfortunately, I got very close to Aleix Espargaro and braked late, asking too much of the front tyre. The crash was completely my fault.”

Jack was soon due to get his stitches removed from his arm due to the recent arm pump surgery. In this most recent crash, Ducati Corse revealed that the collision pulled the stitches out. Although the timing of the incident was convenient, it would have still been rather concerning for the Australian. Especially since Jack Miller admitted, he was at fault for the collision.

Jack finished in ninth place in the Losail circuit on the previous weekend. The fact that he didn’t score any points in Round 3 leaves him at the twelfth place in the Championship. He is currently 47 points behind Fabio Quartararo, who currently takes the top spot on the leaderboard after the last two races.

“The last three weekends have been quite difficult, but I have been through much more complicated times in my career,” said Jack.

“Now, we have to keep doing our job well, trying to stay focused to get better results already in the next race.”

Round 4 will be taking place at Jerez on April 30-May 2 for the Spanish Grand Prix.

Related links (Jack Miller Has Admitted He Was At Fault):