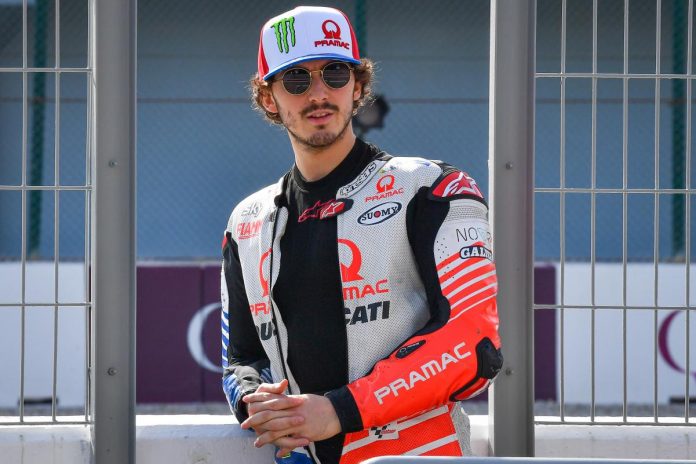 Francesco Bagnaia discusses his fears in regards to the 2021 Factory Ducati seat.

It’s been a tough time for Francesco “Pecco” Bagnaia. After a smoking engine in Andalucia and even worse, a fractured right tibia in the Czech Republic during opening practice, many are left to wonder what the future will hold for the MotoGP racer. Understandably, 2020 has been a major setback and has cast a massive shadow of doubt in regards to his promotion to the factory Ducati team for 2021.

Francesco Bagnaia discussed his fears in 2021, stating, “One thing that pushed me a lot during rehab was the fear of losing the factory seat.”

With the announcement in Austria about Andrea Dovizioso discontinuing his place with Ducati, his factory seat was officially available. Tensions as a choice to be madewill it be Pramac’s Bagnaia or Avintia’s Johann Zarco?

“I tried to come back at to demonstrate what I had done in Jerez. With my trainer, I had done a really great job, physically and mentally. I arrived in Misano with pain but I was convinced I could fight for the top positions,” explained Bagnaia.

With this level of confidence and commitment, Bagnaia qualified in sixth second place behind Franco Morbidelli riding to a debut podium.

The following weekend, his form continued to build achieving fifth on the grid, on the way to victory before falling from the lead.
However, Gigi Dall’IgnaDucati Corse general manager, witnessed enough to recognise Bagnaia as worthy of the 2021 Factory ride.

“What [Francesco] did was really important in my opinion,” Dall’Igna said. “It was a crucial period in his career because he got injured at . And so for him, both mentally and psychologically, it was really difficult to deal with As well as his athletic performance, it was the way he reacted to such a big setback that influenced the decision to choose him.”

is insistent on using his newfound wisdom to better assist his mindset and development into the full 2021 season.

“I will try to keep this mentality this year,” he said. “Try to do it like I did before Misano. I would like to be competitive like this period last year for all season.”

The Misano form predicted Bagnaia was going to experience a strong end to the last season, when in actuality he finished three of seven races, with sixth place being the best result.

“The thing was the temperature. Where we find hot temperatures. I was always fast. But when we found lower temperatures, like Aragon, I started struggling most of all with the front. I started crashing without pushing. That was critical for me,” said the 24-year-old. “I prefer to have a better feeling with the front than rear. For the front, if you lose it you crash. The rear you can manage with gas“

Bagnaia explained, “I have worked on this during this winter. Concentration and pushing when we have lower temperatures. I am lucky to have Jack [Miller] as a team-mate. He’s very good in this [low] temperature It’s something I have to work on if I want to stay with the faster guys. Looking at the data of Jack last year, this was clear. He was already fast from the first lap. I looked at every session of was fast. It was very easy to see my exit lap was 4 or 5s slower than the lap of Jack.”

“I have to learn to push without feeling to warm the tyre. If I can make it from the first lap, we can ride like we have more temperature. This is the most important thing to improve because it will be easier to be faster always.” said the young Italian racer. “I’ve been trying to work on it at the ranch. I tried at the ranch to push from the first lap and have improved, although it’s not the same as MotoGP for sure.”

“Our goals must be to win the riders’ championship, or better still, both championships,” Dall’Igna explained.

Bagnaia continued, “In Moto2 I was consistent and wasn’t crashing. In the last two years, I’ve made a lot of mistakes. I would like to be more competitive or consistent, also in the wet or in cold conditions. A factory rider has to be competitive always. When you have some problems or difficult moments, the result you need to do is the fifth position. You always have to be there. If we see in the championships of Vale or Marquez, a lot of times they don’t go out of the top 5.