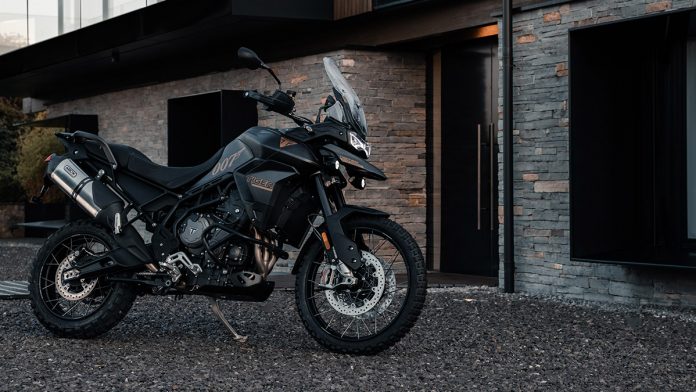 Triumph has recently announced the release of its new Tiger 900 Bond Special Edition Adventure motorcycle. Inspired by the Tiger 900 Rally Pro, this limited edition bike celebrates the partnership between two British icons. Featured in the new Bond film, No Time To Die, the release is strictly limited to just 250 motorcycles worldwide, with a handful set for Australia.

Established in 1902, the iconic British motorcycle manufacturer, Triumph, is known for producing premium, iconic bikes. With their exceptional range of top-of-the-line motorcycles, it only made sense that these two British legends would team up for the forthcoming 25th Bond film.

The Triumph design workshop team came together with the stunt team of No Time To Die to configure several motorcycles. The movie includes special preparations of the Tiger 900 and Scrambler 1200 models featured in the films’ exhilarating and dynamic action sequences.

The stunt coordinator of No Time To Die, explains: “The Tiger 900 is the most confidence-inspiring bike, it allows you to really push the ride as far as you want, you can take as many liberties as you want; stand up sideways drifting in third gear, slow wheelie it, slide it Supermoto-style. I honestly think it’s one of the best bikes I’ve ever ridden. It’s fantastic.”

From this collaboration, comes the release of Triumph’s limited edition run of Bond-themed Adventure bikes. Built off the Triumph Tiger 900 Rally Pro Adventure motorcycle, you can expect all the top-of-the-range specs with exclusive 007TM graphics and detailing.

The graphics and paint job aren’t the only things that differentiate this limited edition release from the Tiger 900. This special edition version also comes with additional specs not seen in the standard model. For starters, the Bond Edition includes an additional pair of high-performance Michelin Anakee Wild handbook-approved off-road tyres. This comes in addition to the factory fitted Bridgestone Battlax tyres. The Bond Special Edition also comes fitted with a premium Arrow Silencer.

The Tiger 900 Bond Special edition has a strictly limited release of just 250 motorcycles worldwide. Each bike will come individually numbered with a signed certificate of authenticity.

Ricky Carmichael Has Teamed Up With Triumph